Posers of the grammar world
Grammar has eight clearly defined parts of speech, but not all words like to stick to a single part of speech. Consider the word clown, which is usually a noun (The room was full of clowns), but could also be a verb (DJ Easy-E clowns the competition) or an adjective (He climbed out of the clown car).

"What about building? Like in, I went to get some building materials? Or as in, Building relationships is important?"

Verbs are (as always) more complicated.
​They can act as other parts of speech while staying verbs.

Action verbs never fully become other parts of speech because they always convey their action to the reading. Building materials convey the idea of a person using them to build. Building relationships conveys the idea of actual effort and work in constructing a relationship. Instead of ever converting into an adjective or noun, verbs just pose as these other parts of speech. These words are known as verbals, and come in three types: gerunds, participles, and infinitives.

GERUND: acts as a noun

A gerund is a present-tense verb with the suffix -ing that acts as a noun. The gerund is either the subject or object in a sentence, and gerunds are usually used for activities like swimming, cooking, bowling, and driving before a linking verb. As action verbs, gerunds can also take objects and modifiers to become gerund phrases. Below are some sentences where the gerund is in green and the gerund phrase (if present) is in blue.

Swimming is a great way to stay in shape.
I don't like reading in my spare time.
Adding a spoonful of olive oil to oats helps them toast quicker.
I am a natural at cooking desserts, especially cakes.
I don't like how much writing Mr. Coon assigns. 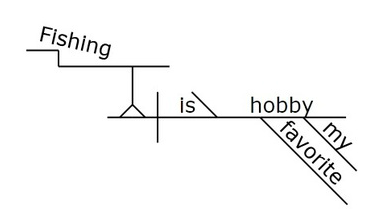 PARTICIPLE: acts as an adjective

I don't like my driving instructor.
The air is full of ionized atoms from the lightning storm.
My grandmother is running for mayor.
I saw my sister wearing my new pink top, so I throat-punched her.
Removed from his habitat, the tiger began to pace and panic.

Notice that the participle phrase in the last example is moved to the beginning of the sentence. This is grammatically fine so long as the noun being modified immediately follows the phrase. If it doesn't, this is a dangling modifier and is not grammatically correct. Below shows how participles are diagrammed: begin with a slanted modifier line, then make it flat like a verb line; the participle curves around both lines. 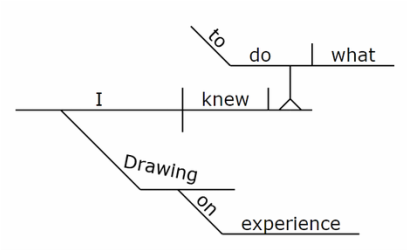 Finally, an infinitive is a verb paired with the word to, making it look like a preposition: to build, to go, to kiss, to lose. The infinitive can act as a noun or modifier (adjective or adverb), and can take objects and modifiers just like other verbals, forming infinitive phrases.

I like to eat potato chips.
To love means accepting sacrifice.
To survive Mr. Coon's class, you will need to pay attention in class.
Sarah is the girl to know if you want to get sold-out concert tickets.
To avoid Creepy Lloyd, Alison never goes to the Java Shack. ​

Below shows how to diagram a infinitive: essentially, it is the same as diagramming a prepositional phrase, with to on the slant and the verb on the flat line. If the infinitive is acting as a noun, it goes on a stilt; if it acts as an adjective, it goes under the word it modifies.

Like normal verbs, infinitives have different forms. A bare infinitive is where the to is dropped: this is the verb form that is used in dictionaries. A perfect infinitive is to have + verb (He wished to have won first prize). Despite being a verbal and hence a verb not behaving as it should, infinitives are some of the most common verbs used.

Practical questions: Can I split an infinitive?
While we're on the subject, let's talk about split infinitives. A split infinitive occurs when a modifier is placed between to and the verb (to scientifically illustrate, to desperately change). Many grammarians claim that infinitives cannot be split: do not trust these people. Infinitive can, and sometimes should, be split. The reason for this silly "rule" is that infinitives can't be split in Latin--but this is English, so who cares? Here's an example: take the sentence Mia decided to open the coffin lid. Now, let indicate that she was crawling slowly--we can do this in three ways:

Version 1 seems to modify decided more than to crawl, and she didn't slowly decide. Version 3 is awkward, as the syntax of "to open slowly" involves a lot of pronunciation. Version 2, with the split infinitive, is actually the best choice, so don't be afraid to split where it makes sense.

Verbals look like they make grammar harder. Why do we even have them?

Like pronouns, verbals exist to simplify the English language. English is an action-oriented language, and we like to put as many verbs as possible into our sentences when writing, as writing with lots of verbs is more engaging to a reader. If verbs were to stick to their traditional definitions, however, each would need a subject, creating a new clause and making what should be fairly simple sentences (like I want to leave) more complex (I want this: you and I will leave). In everyday speech, you are constantly using verbals in what you say and write. In fact, excepting my italicized examples, this paragraph contains ten verbals: to simplify, action-oriented, to put, writing, engaging, to stick, creating, making, excepting, italicized.

So why aren't verbals their own part of speech? Despite their posing as different parts of speech, verbals are verbs. They make act a little funny and screw up the normal diagram, but they fit the definition of conveying action and can show tense, aspect, valency, and even mood. Even if they are posing, each verbal is a verb at heart.