The goal of all rhetoric is to win the argument and convince the reader. Nut what makes something convincing? This idea nagged at the Greek philosopher Aristotle. As a student of Plato, he believed in the Socratic ideal of eudiamonia, a time when everyone would act in society's best interest for the common good. He had ideas of how to achieve this, but how could he get others to believe him? In his book Ars Rhetorica, Aristotle studies arguments by both good and bad speakers in order to determine what makes an argument convincing. Aristotle discovered three principal appeals that, when in balance, make and argument strong: logos, ethos, and pathos. 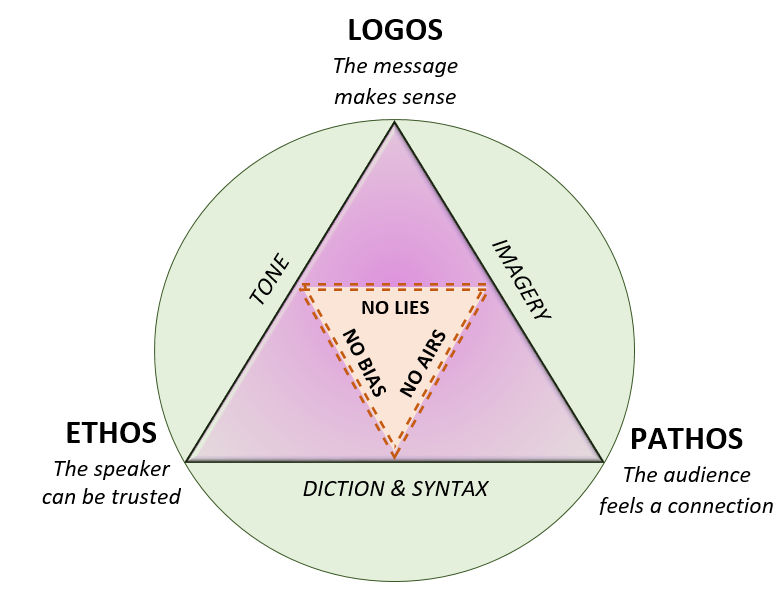 Logos (logic) appeals to our sense of reason: the arguments fit together and the data makes sense. There are no holes in how data ties to claims and nothing is added that shouldn't be included. The best way to build logos in a piece is to research a topic properly. List questions you have about the topic, then research potential answers. Explain each data point thoroughly when connecting them to the claims you make. Never assume the audience knows something-- walk them through every thought. Follow the structure of rhetoric and the rules of good writing and your logos should be solid.

Ethos (ethics) appeals to our sense of trust that the argument is credible. Ethos is essential: if a reader doesn't trust the speaker, they won't trust that their thesis can be trusted. So how do you ensure you have ethos? First, don't cite bad sources for your data. This is why Wikipedia is verboten in academic research: anyone can change the facts on Wikipedia. Instead, cite known experts and objective researchers. Second, if in a debate, stick to the rules of the debate and act respectfully. You also want to reveal your role in writing the piece. If you are student, you will have a different perspective than a politician on a matter. It is also important to be upfront with any associations you have: politicians are open with their political affiliation so the public gets a general sense where they stand. Revealing one's personal credibility and associations helps prevent accusations of bias (see the section on the orange triangle).

One of the best ways to build ethos in an argument is to discuss the counterargument. The counterargument is the argument opposite of the thesis-- what the "other side" believes. A good essay states the counterclaim, then refutes (disproves) it or making a small concession (admission that the "other side's" evidence is right but the warrant is wrong). This shows ethos by acknowledging the opposition, yet does not harm the essay because the opposing belief is disproven. Be careful in doing this that you do not dismiss the opposition as a strawman, but also be wary that you don't undermine your own argument.

Pathos (passion) appeals to the reader's emotions. Pathetic arguments with strong pathos relate directly to the audience and "feel right." Each of the cardinal emotions can be used for pathetic appeals (except trust, as that is ethos):

Remember that pathetic appeals are very strong, and if they are relied upon too heavily, they can easily undermine an argument. Each pathetic appeal can also be a fallacy if used artificially (see more on the fallacy page).

We've looked at each corner of the purple rhetorical triangle, but how are these appeals connected to one another? What ties a speech's credibility, say, to its logic? The answer to this is the green circle, which contains the four elements of style: tone, imagery, diction, and syntax. Each element of style blends the rhetorical appeals together so they become intertwined and stronger.

IMAGERY: The use of imagery in a piece connects its pathos and logos. Sometimes imagery comes in the form of metaphors: Imagine if the budget was a pizza--the department of the education supports twice as many people as the military, yet they get three bites of pizza while the military gets half the pie! Other times, it comes in the form of anecdotes: I went to the refugee camps, and I looked in the eyes of a seven-year-old girl who hadn't eaten in three days and was shivering in clothes a size too small. Imagery allows audiences to feel something about the message by putting it in emotional terms. Imagery bolsters logos by developing warrant into an easier-to-understand argument, and imagery bolsters pathos by giving the audience more things to care about.

DICTION AND SYNTAX: Word choice and sentence arrangement connects the ethos and pathos of a piece. A credible expert should sound like an expert, so using the lexicon of the discipline builds ethos in a speaker. However, audiences also like understanding every part of an argument, so additionally using simpler terms and slang the audience understands builds pathos. Syntax strengthen ethos by making a speaker sound smooth and rehearsed (audiences hate mumblers and stumblers), while it also strengthens pathos when it incorporates repeated phrases and punctuated sentences audiences can remember and even chant as a slogan.

In the section about rhetorical fallacies, I discuss arguments that may sound convincing but actually weaken the argument. These can hurt an argument but not kill it, as some audiences are more or less forgiving and even convinced by fallacies. However, there are three "sins of argument" that, should a speaker be caught committing them, the argument is utterly and inexorably destroyed. These are the orange triangle of lies, bias, and airs. To sustain an argument, a writer has to keep these out of an argument.

LIES (DESTROYER OF LOGOS): Great speakers take pains to make sure every piece of evidence supporting their claims is well explained and proves the point. This is the heart of logos: objective observations and statistics, when connected together, prove this conclusion. But what if the data was falsified? What if the author lies? An argument full of lies is worse than an argument without proof: lies have the connotation of intentionally misleading an audience. Conclusions based on false data are false conclusions. Even if the piece has accurate data except for one lie, that one lie calls into question the validity of the entire piece.

BIAS (DESTROYER OF ETHOS): Bias is an unfair personal prejudice against a group, person, or idea. Many speakers think prejudice is fine in argument because the speaker obviously wants one side to win over another, but this is not what ethical bias is. Ethical bias occurs when a speaker ignores greater realities and effects and supports the thesis for personal reasons, not because it is the best answer to a problem. For example, a politician may argue against a trade deal not because it would hurt local workers but because her husband's business would profit from the deal. If a reader thinks the speaker has his or her own interest and not their interest in mind, they will reject the message as self serving.

AIRS (DESTROYER OF PATHOS): To "put on airs" is to condescend to a person and tell them what to do because they don't know any better. "Listen up: if you support Ms. X as a third party, you are wasting a vote because anyone can see that Mr. Y and Mrs. Z are the only viable candidates." Audiences hate this. They are respectfully listening to what the speaker is saying and expect respect in return. Even supporters of the message do not like being talked down to. Another way to put on airs is to pander to a certain group, meaning the speaker acts a certain way with that group but not other groups. For example, a politician could pander by sympathizing with homeless veterans when they, in fact, voted against a bill expanding veteran medical services. While this seems like an ethical issue, it is actually a pathetic issue, as it depends wholly on how the audience perceives a speaker and not necessarily on what the speaker says.