WRITTEN NUMBERS CAN BE CONFUSING

Numbers have two basic forms: digits (7, VII, vii) and phonetic spelling (seven). It's easy to ignore these separations in speaking and mathematics, but writing presents a conundrum: which do you use, the phonetic spelling or the digit? Here is a chart followed by are some guidelines to clarify usage of numbers in writing: 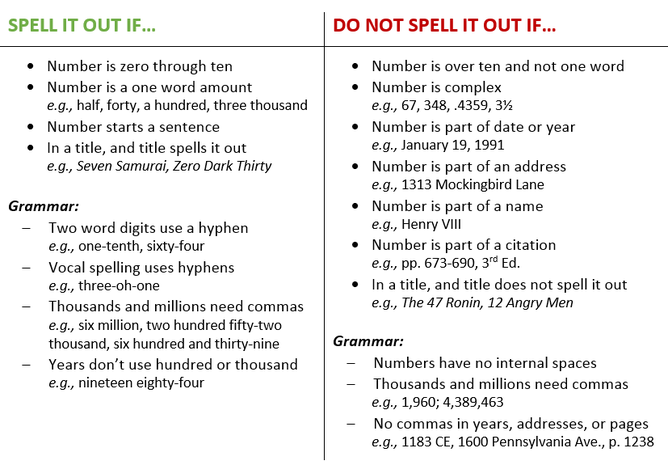 RULE ONE: If it's ten or under, spell it out.

The basic rule of writing is to keep writing as clear and simple as possible, thus many digits are spelled out to maintain the consistent look and flow of a piece of writing. None, one, and two are among the hundred most used words in the English language, and three through ten are all found in the top 250. Therefore, zero, one, two, three, four, five, six, seven, eight, nine, and ten are always spelled out.

RULE TWO: If it's one word, spell it out.

Notice that all the digits in the rule above are all one word. Similarly, larger numbers that are just one word are spelled out. Instead of 40, forty should be written. This also works for hundreds, as each part of the number is one word. When 200 is said aloud, the number is split into two and then hundred-- thus, we spell out two hundred. The same goes for six thousand, seven million, and ten billion.

An exception to this are the teens (eleven, twelve, thirteen, fourteen, fifteen, sixteen, seventeen, eighteen, nineteen). Though they are all one word, they are left to the writer's discretion of whether or not to spell them out. This is why you see variance in titles of films and texts: 12 Angry Men is just as valid as Thirteen Ghosts.

RULE THREE: If it starts the sentence, spell it out.

One of the most fundamental rules of grammar is that a sentence must start with a capital letter. Since digits aren't letters, if you want to start a sentence with a number, you must spell it out. This keeps the layout and grammar consistent. So instead of "47% of respondents said yes," you should write "Forty-seven percent of respondents said yes." If spelling these numbers out will seem disruptive or time-consuming, rephrase your sentence so the number is not first ("Only a minority of respondents (47%) said yes."

RULE FOUR: If you spell out digits, punctuate them correctly.

Between 20 and 100, and number not divisible by ten (twenty, thirty, forty, fifty, sixty, seventy, eighty, ninety) consists of two words. If you are spelling out one of these digits, you must hyphenate the words. For example, 97 becomes ninety-seven, and 53 become fifty-three. Fractions also get a hyphen where the divisor line would go. Thus, 2/3 becomes two-thirds, and 11/16 becomes eleven-sixteenths.

Place commas between thousands, millions, and billions--essential where the commas are in the digit. The number 4,233,658,902 would thus be spelled four billion, two hundred thirty-three million, six hundred fifty-eight thousand, nine hundred and two.

When trying to imitate speaking a number in writing, each digit is spelled out and connected by a hyphen. He is an example: "Barry enunciated slowly, 'Thirteen-five-oh-nine Broadway. Is that downtown?'" This is also how to spell out decimals: "There is a point-zero-three-five percent chance of statistical error."

RULE FIVE: If it's an exact measurement or digit-based, don't spell it out.

Notice how much of a pain it is to write out 4,233,658,902 and .035% in the examples in the rule above. This is why most numbers are not spelled out. Amounts of money, statistical figures, and units of exact measurements should only be spelled out in the cases of rules one, two, or three.

Additionally, some concepts are actually digit-based and have no word equivalent. Whereas 3 equals three as a concept of counting, a phone number has no written equivalent: Jenny 867-5309 represents only itself, and should not be spelled out. The same goes for addresses, like 1600 Pennsylvania Ave or 1 Times Square. Notice that since addresses are never spelled out, we can ignore rules one, two and three. Digit addresses also never use commas.

RULE SIX: If it's a measurement of time, don't spell it out.

While months of the year should always be spelled out, it is rare to see the day or year spelled out--there two almost always keep their digits. There are two ways to format a date: the American way (March 22, 2003) and the European way (22 March 2003). Notice that the American way uses a comma between the date and year, while the European way uses no punctuation. You may use whichever format you like better EXCEPT when it comes to citation (MLA requires European dates and APA requires American but with the year first [2003, March 22]).

​Years in particular have interesting grammar. If for some reason a year is spelled out, it is bisected into two digits and those are spelled out: 1984 becomes 19 + 84, and is spelled nineteen eighty-four, not one thousand, nine hundred eighty-four. Similarly, dates written as digits never use commas.

Times not confirming to rules one, two, and three (thirty seconds, half and hour, quarter to five, etc.) are also written in digits. Times of day are written with the hour and minute divided by a colon (10:30 AM, 4:43 PM, 23:00). Amount of time, such as the length of audio and video, have three divisions four hours, minutes, and seconds (2:43:03). If there are no additional seconds, you must still show the measurement (2:43:00). However, if the time is, say, only three minutes and three seconds, you can cut the previous digits (3:03).

RULE SEVEN:  If it's part of a person's name, don't spell it out.

RULE EIGHT: If it's in a citation or equation, don't spell it out.

﻿RULE NINE: If it's a title, only spell it out if it is spelled out in the title.

Titles of texts seem to ignore every rule on this page, as it is up to the author to create a title that reflects the text. While most titles follow the above rules, some break them, like Tim Burton's 9, Don Boyd's Twenty-one, and David Fincher's Se7en. Some texts even do both: George Orwell's famous dystopian novel has been published as both Nineteen Eighty-Four and 1984. Regardless of what the author does, write the title faithfully to how the source spells it. Thus, 8 Mile should not be Eight Mile, Clerks II should not be Clerks Two, and "Eleven Fifty-Nine" should not be "11:59."