The Parts of Speech

No matter the language, words can be grouped together into different parts of speech based on how they function in the sentence. Some words describe the world around us: what we see, how we act, and the qualities of those things and actions. These words are expressive parts of speech and include nouns, verbs, adjectives, and adverbs. As the world around us is constantly changing, we constantly come up with new words (neologisms) to describe it-- thus the number of expressive words in the English language is constantly expanding with these neologisms. 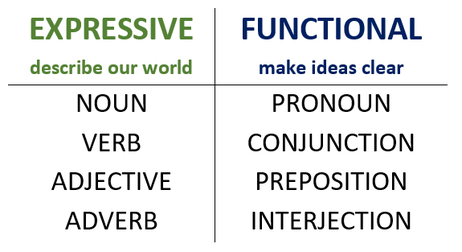 A noun is a person, place, object, or concept (ideas, states, and qualities).

ALL CLAUSES REQUIRE A NOUN. Nouns have three qualities: case, title, and number. CASE refers to if a noun is the subject of a clause, the object of a phrase or clause, or shows possessive ownership. TITLE refers to if a noun has a specific and proper title or is common and unspecific. NUMBER refers to the plurality of nouns: how to count them (if they can be counted) and how to express that there's more than one. Some specific nouns (brother, daughter, girl, etc) also show gender.
NOUN PAGE

A verb is an action, occurrence, or state of existence.

An action is any act that can be performed. An occurrence is an act over which no one can control (e.g., became, happens, transpired). A state of existence is a definition on if an how a subject is real, imaginary, alive, or dead. There are two types of state of existence verbs: linking verbs (which reveal how an object exists) and helping (or auxiliary) verbs (which show condition or aspect).
ALL CLAUSES MUST HAVE AN ACTION OR LINKING VERB. As English is an action-oriented language, verbs are the most complex part of speech. Verbs demonstrate TENSE (when they occur), ASPECT (how long they occur), VALENCY (how many arguments it can take), and MOOD (tonal expression). Some verbs called verbals can also act as other parts of speech, and verbs must show agreement with a subject in a clause. The verb also determines whether a se ntence is active or passive and what sort of complements a subject may take.

﻿﻿Adjectives and adverbs are modifiers, meaning that they describe or alter other parts of speech by answering questions about those words. Adjectives modify nouns and answer how much/many, which one, what kind, and whose?, and include some types of nouns and prounouns that act as modifiers:Some What kind adjectives can have a specific title and, much like proper nouns, are called proper adjectives (American flag, Facebook message, Jewish mother...).
​
Adverbs modify verbs, adjectives, and other adverbs, and answer where, when, why, how, and to what extent or degree? While adverbs commonly end in -ly, the four most commonly used adverbs do not: NOT, NEVER, JUST, and VERY.​
Several adjectives and adverbs also show or imply comparison to other subjects. These are either comparative modifiers (better, worse, darker, brighter) or superlative modifiers (best, worst, darkest, brightest), and take on specific suffixes.
MODIFIERS PAGE

A pronoun stands in for a known noun.

Language should communicate ideas is a quick and clear way. If we had only nouns to work with, we would be unable to do this, as we would have to say everyone and everything's full name each time we referred to it. Thus, we have pronouns to clean up our language. There are several different types of pronouns:

Though there are many types of pronouns that are used in different ways, there is one idea that all must follow: they are standing in and this represent a previously stated noun, which is called an antecedent. If a paragraph started with, "She walked into the room, lip quivering. She saw him, the boy she dreamt of every night. She wondered if she would ever talk to her, or if he even knew she was alive. She decided that she would be courageous and sit by him today." We have no idea who she or he is: we need an antecedent noun to know who we are talking about. Even indefinite pronouns have an antecedent concept: Someone in this room stuck gum to my desk implies that the subject is not specifically known but is a member of the group in the room.
Pronouns page

Conjunctions are like language glue: they connect ideas on the level of words, phrases, and clauses.

WORD LEVEL: Bill and Ted
PHRASE LEVEL: You must either do the work or take the F.
CLAUSE LEVEL: I love to dance, but Kira's is too self-conscious to join me.

So conjunctions can join words, phrases, and clauses--can they connect sentences? A special type of conjunction called a conjunctive adverb does just that: conjunctive adverbs are inserted into a second sentence to show a relationship to the first sentence.
Studies show that this trend is escalating. Additionally, the scientific community has increased research on the topic.
The French declared it law in 1750. That law, however, would only last 23 years.
​Finally, the result demonstrate our hypothesis was correct. We must therefore stop adding this to the water.
If these conjunctive adverbs look familiar, they should. They are commonly referred to as transition words.
CONJUNCTIONS PAGE

A preposition shows a physical relationship between objects.

To determine what words can be prepositional, think about a ball and a box:

Image source: ProProfs.com
Prepositions can be single words but can also be phrasal, as in the examples of expect for, in spite of, and next to. They can also come at the end of an action verb to form an informal phrasal verb like sat down, threw up, coming up, or messing around (see the verbs page). Unless part of a phrasal verb, prepositions always start a prepositional phrase, which starts with a preposition and ends with an object (noun or pronoun). These phrases are adjectival or adverbial in nature, depending on which modifying question they answer (see the modifiers page for more).

Practical question: Can I end a sentence with a preposition?
Sometimes. The literal definition of a preposition is that it is before (pre) a word to show its relationship (position), so the hard and fast rule for centuries has been that sentences cannot end with a preposition. However, modern grammar has allowed for some practical exceptions to this rule:
​1) If the preposition is actually part of the phrasal verb: I think I'm going to throw up.
2) If the sentence is a question with the object of the preposition earlier in the sentence: What are you waiting for?
3) When a writer wants to shift a verb's placement in the sentence to create emphasis: We know which door the prize is behind.

An interjection shows a sudden outburst that stands outside a sentence.

Interjections are the strangest part of speech. Interjections are often phrasal instead of singular and can include almost any word. Interjections can show high emotion, low emotion, or no emotion. The only quality that defines an interjection is, while tangentially related to a sentence, it has no grammatical connection to a sentence. Appearing often at the beginning or end of a sentence, interjections are outbursts that interject a quick idea. Here are some examples:
What? We spent an hour on that sketch and you're starting over?
Oh, I didn't know you two were dating.
I just don't think you should it, okay?
She's dating Ryan now? That two-timing skank!
Some interjections called nouns of direct address are useful in clarifying who a speaker is talking to by inserting their name somewhere in the sentence. Again, the name has no grammatical connection.
Jane, this is the last time I bail you out.
Wherefore art thou, Romeo?
I can't believe it, Frank, what they're doing to the company!
Notice that interjections are always offset from the rest of the sentence by a common if they don't convey emotion and by an exclamation point if they do. This reinforces the idea that interjections are separate from the sentence, and even appear this way in sentence diagrams.