Essay writing is one of the most needed skills in academia, as well as one of the hardest. A great essay is detailed but to the point (traditional essays are under 30 pages-- anything longer is a dissertation or thesis). A great essay engages the reader with an otherwise dull or mundane topic. Most of all, a great essay is a great argument. Almost every essay, from scientific reports to novel analyses, are rhetorical in nature. If you haven't read the section on rhetoric yet, do that before going any further. For those who can make an argument but still struggle with essay structure, let's examine the most crucial parts of the essay.

PLANNING IS THE MOST IMPORTANT STEP OF WRITING, and the best way to plan an essay is a formal outline. A formal outline starts with a fully developed thesis (go to the thesis page if you need help with this). Each claim is listed with an uppercase Roman numeral (I, II, III, IV...). Under each claim, pieces of evidence are listed with an indent and a letter (A, B, C, D...), and under each data point, the warrant is listed using another indent and Arabic numerals (1, 2, 3, 4). Using an outline ensures that all paragraphs revolve around only a single claim and that all pieces of evidence have warrant. Here's an example of a formal outline: 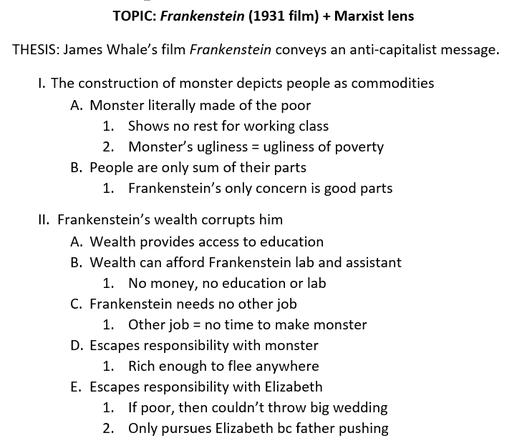 All essays should start with an introduction to ease the reader into the topic. All introductions should have three elements: a brief summation of the situation or text, the context or background of the topic, and the proposed solution to the problem: the thesis. For my example outline, which looks at the film Frankenstein from a Marxist critical lens, the summation would be a summation of the film (Victor Frankenstein robs graves, builds and gives life to a monster, and the monster goes on a killing spree), and the background would be the background of the film (based on Mary Shelley's novel, one of most successful and controversial films of 1930s, spawned seven Hollywood sequels and four remakes). The summation gives the reader an idea of what the topic is about if they don't already know, and the context brings the importance of the text or topic into focus. ALWAYS END THE INTRODUCTION WITH THE THESIS.

"But how do I start an introduction? Like, what's the first line?"

Grabbing a reader's attention is one of the hardest parts of writing. This is why most professional essayists write the introduction after the main paragraphs. A strong opening line, called a hook, should make a reader want to read more, but should not be too long or unrelated to a subject. Some good ways to hook a reader include:

So how do you emphasize the meaning of your argument? One way is to challenge the reader to take action: with my Frankenstein example, I could remind the reader of how important a Marxist perspective is when watching films. Another way is to discuss the legacy of a text: for Frankenstein, I could discuss how the film's reception allowed James Whale to push the themes further in Bride of Frankenstein and The Invisible Man. Another way is to look to a possible future, either positive or bleak: I could stress that including Marxist themes in films help make audiences more aware and supportive of social progression and change.

But how do you establish finality? That's easy: end on a strong point and DON'T INTRODUCE ANY NEW INFORMATION IN THE CONCLUSION.

A good title has three features: it catches the reader’s interest, it reflects the tone and subject of the piece, and it is uncommon enough to be found easily in a keyword search. Beyond this, what makes a good essay title is not the same as what makes a good story title.
Ways in to writing a title:
Titles should be as short as possible to make them more memorable