Simplifying language
A pronoun is a word that takes the place of a noun. But why? Nouns already exist, so why do we need pronouns? Well, as useful as nouns are, they can be long and clunky. Take your name. Imagine instead of saying I or me, you had to say your full name every time. Or instead of you, imagine saying the full name of every person you were addressing. It would take forever to get through saying anything. Pronouns were invented as a shorthand for the most commonly used nouns to make language quicker and simpler.

Yet pronouns only make communicating simpler if they are used correctly. Read the following lines: She started from nothing, but after a stint with a modeling agency, she got her big break in Hollywood. She became a successful, top-billed actress, leading her to win accolades and become a lasting icon. Who am I talking about? Natalie Portman? Marilyn Monroe? Kate Upton? Angelina Jolie? When the text is all pronouns, it becomes vague. That's why every pronoun requires an antecedent, a stated or implied noun that it refers to. The antecedent almost always comes before the pronoun in question and is typically the subject of the first sentence of the paragraph.

Personal pronouns take the place of specific people as an antecedent. Since these pronouns are based around people, they are also grounded in plurality and perspective. Each personal pronoun can be classified by case, person, and plurality. Here's a handy chart: 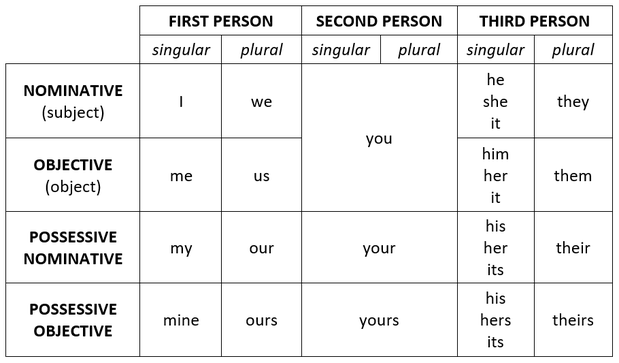 While this table looks complicated, personal pronouns in English are simpler than other languages. The only gendered pronouns in English are third person singular pronouns. Also notice how you is both nominative and objective: it wasn't always that way. In Middle English, you was only for plurals. Second person singular had four other pronouns: thou (nominative), thee (objective), thy (possessive nominative), and thine (objective nominative). Though these words were dropped in the mid-seventeenth century, they can still be found in the works of Shakespeare and metaphysical poetry.

While no new pronouns have entered the English dictionary in over 500 years, there have been informal attempts to add new pronouns. Some regions of the United States have made their own plural second person pronouns, like y'all or youse. Transgender activists have also unsuccessfully pushed for a set of gender neutral third person singular pronouns, including ze, vis, hir, and eir. While once unacceptable, most modern grammarians allow they and them to be used as gender neutral.

​If personal pronouns refer to a known person or group, then indefinite pronouns refer to general or unknown persons and groups. To be clear, there is still an antecedent, but the speaker isn't sure what is is. In the sentence Does anybody have a red pen?, the antecedent person is whoever has the red pen (or no one if no one has one). There are lots of indefinite pronouns: here are all of them.

Like most words, figuring out indefinite pronouns are all a matter of context. Sometimes these words are pronouns, and other times they are modifiers. Take the sentence Another one bites the dust: one is a pronoun (and the subject of the sentence) while another modifies the subject. Also notice that some indefinite pronouns are singular, some are plural, and some can be both, so always double-check that there is proper subject-verb agreement.

REFLEXIVE PRONOUNS: Personal pronouns, plus the self

DEMONSTRATIVE PRONOUNS: Show which one

Practical question: What's the difference between who and whom? What about that and which?
Who is a nominative pronoun and always is a subject: He's the only guy I know who can wrestle a crocodile. (subject of can wrestle)
Whom is an objective pronoun and always is an object:  He was the man whom the president fired (object of fired)
That is used for restrictive clauses but never for people: I baked those cookies that you are eating (essential to sentence)
Which is used for nonrestrictive clauses: I slept all night in the bathtub, which wasn't easy (not essential to sentence)