How we react to texts

WHAT ARE YOU READING TODAY?

Reader response theory falls into the category of PERSONAL MIRRORS, or criticisms that reflect an individual mind and personality. These criticisms focuses on the ideas of The Self, a term for an individual's definition of their own identity and how this identity makes them different from others. While the psychoanalytical lens examines the identity of the characters through Freudian analysis and the archetypal lens examines the mass identity or the collective unconscious through Jungian analysis, reader response focuses on the identity of the reader as revealed by the text.

So why should we care what a reader thinks? For reader response theorists, a text is incomplete without a reader to read it.  This is because all texts build a world, whether the text is an epic or a one-act play. However, no matter how long a text is, the author by necessity includes blanks, or gaps in time and action, especially at the beginning or the ending of the story. Take Nora in A Doll's House: the play shows us that she is married to Torvald and has three children, yet it doesn't explain how she met him or what made her fall in love with him. At the end of the play, Nora leaves Torvald to escape his psychological abuse, yet we don't know what will happen to her, Torvald, or the children after she closes the door. Blanks also exist between scenes and for other characters: while we know that Krogstad is talking with Kristin while Nora and Torvald are practicing the Tarantula in Act II, we never see this conversation. For all these blanks, the reader must infer what happens using textual clues in addition to their own experience. Thus, the reader is an intractable part of creating the text.

This is reception theory, or the idea that an audience creates text meaning through their participation. Reception theory is easiest to understand in theatre. Let's say you are in the audience watching a performance of A Midsummer Night's Dream, and the audience starts laughing when Nick Bottom first comes onstage and starts vying to play every part in Pyramus & Thisbe. The laughter will not only make the actors pause for a few seconds (that way, the laughing audience won't miss the next line) but will make the actors feel more confident about their own performance, and they will be willing to talk more comic chances to please the active audience. Conversely, if the audience doesn't laugh at all in the first act, the play will seem to drag, as the actors may feel that the audience doesn't care. Now, this makes sense with live actors responding to a live audience--but how does a static text like a book or a movie do this? Reader response theorists argue that, while the words on the page or images on a film do not change, the way the audience responds constantly changes, and since the audience helps construct the text by filling in the blanks, the meaning of the text changes with every audience. The extreme of this idea is what theorist Stanley Fish called affective stylistics: the idea that a text doesn't even exist with an audience Basically, if no one opens the book, the story inside never exists, and readers themselves determine what is significant in a text. This makes reader response the antithesis of formalism, which rejects any subjective textual interpretation. 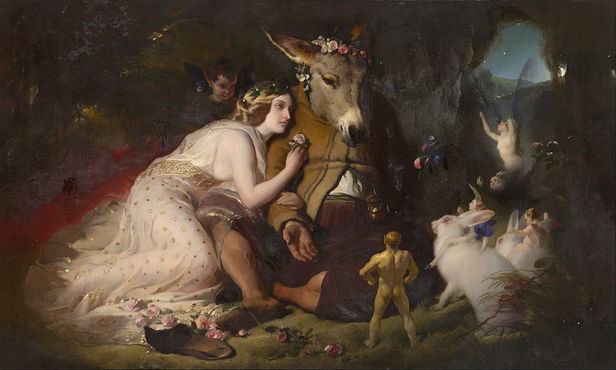 So it's up to readers to figure out if this is normal or not (Edwin Landseer, Scene from A Midsummer Night's Dream: Titania and Bottom, 1848)

The implications of reception theory and affective stylistics give rise to three major questions:
These questions gave rise to three different types of reader response disciplines: the individual focus, the community or uniform focus, and the reactive or experimental focus. Note that each of these disciplines are merely points of focus within the larger reader response structure and frequently cross over into the other two disciplines.

The individual focus addresses the first of our three questions and strives to determine how a reader fills in the blanks in a text. These theorist look at not just an individual reader's response to a text but looks at their personal and psychological history to determine what memories, perceptions, feelings, and intellectual training caused them to fill in the blanks in the manner that they did. Take this example:
These two different reactions come from the personal histories of the individuals. Kyle has only the experiences of sixteen years and relates more to the younger characters, while Laverne relates to the older characters as she's been alive for three-quarters of a century and has experienced marriage, motherhood, and the death of a loved one. Kyle's experience as an outcast made him perceive Stimson's suffering, while Laverne's experience with a drunk brother made her perceive only Stimson's flaws. Laverne's rural childhood memories made the town enduring for her, while Kyle's lack of time outside the suburbs made the town strange for him. The reason the two readers read the text differently came down to what content in the book related to their age, their personal experiences, their feeling, and their knowledge of the world. Individualists like to compare reactions from different readers and look at how these factors affect the reading--and sometimes they even look at the same person. In a practice called recursive reading, a theorist will ask a reader to read a text several times over a series of months or years to see how the reader responds differently as they age, gain more life experience, and become more familiar with the text.

Under the individual focus, we saw the differences in how Kyle and Laverne interpreted Our Town. But there were also similarities in their responses. Both Kyle and Laverne said George asking Emily on a date evoked memories of their own first dates, both found the Professor stuffy (even if one enjoyed him and the other didn't), and both were so moved by the play that they cried. This shouldn't be a shock to most readers: before the date, the Stage Manager tells the audience to "Think back to a time when you were young yourself," the Professor is described as "stuffy" in the stage directions, and George cries at the end of the play along with Kyle and Laverne. The text actively guides the response, leading to a shared interpretation--at least, according to the community focus.

And how does the text guide us to the shared interpretation? Texts use similar plot structures, stock character trait, and archetypes that we know to create a familiar experience. While Kyle may relate to George while Laverne does not, they can both empathize with him crying over his wife's grave as empathizing with someone who has suffered a loss is a universal experience that everyone has had. Community theorists looks to how the author writes these experiences in the text for an ideal reader to decode--the ideal reader being a reader who is part of the intended audience and has enough experience with the text's genre, structure, and life in general that they can react the way the author hopes they will. The ideal reader for a gruesome horror story is not the same ideal reader of a romance novel--for each, the author has established a different horizon of expectations, or reasonable assumptions that can be made about the text and its ideal reader. For Wilder, the ideal reader of Our Town would generally know what it's like to fall in love when young, knows that tragedies end in death, and have general knowledge about how American towns functioned at the turn of the 20th century.

By setting a horizon of expectations, the way a certain type of reader will read the text can be predicted. Kyle is a sixteen-year-old boy, so he'll probably relate to the young characters. Laverne grew up in a small town, so she will appreciate the little details about small-town life. Community theorist make broad interpretations on how certain communities of readers will read a text. They can even predict how the text will be received by superreaders, who are ideal readers that are also literary experts with a wide knowledge of varied topics than can make a connection to everything in the text (supperreaders are typically critics or authors themselves). By exploring how these communities react to a text, community focus theorists hope to determined a shared textual experience.

Both the individual and community focuses examine how a reader changes a text--but can a text change a reader? This question is addressed by theorists of the reactive focus, who believe that texts so strongly guide a reader's response that a reader is changed after reading every text.

How does this work? Take a moment and think of you favorite book or film. Why is it your favorite? Typically responses will be "It made me feel X" or "It was the first time I heard about Y" or "It was so well made." For a reactive theorist, the fact that it stuck out in your mind proves that the text changed you and helped form your identity. In fact, all the texts you've ever read helped form your identity, even the ones you hated. See, we all make certain assumptions about the world: that it is a good place, that it's cruel, that people can be trusted, that people are only in it for themselves, etc. While these assumptions aren't fixed permanently, they're hard to change for most people. Here's what texts do: they typically serve to reaffirm our beliefs through defamiliarization, where common ideas are put in an unusual context to enhance our belief in them. For example, I may believe that everyone has a true love out there somewhere, and watching film after film where people of different ages, genders, and cultures will solidify that idea. If a text presents a new idea that we have no preconceived assumptions for or when a text challenges our assumption, it typically creates new knowledge and changes our personality. Reactive researchers gauge this with scientific measures (e.g., levels of serotonin in the brain), psychological measures (e.g., looking at a reader's motivation for reading a text), and qualitative measures (e.g., simply asking a reader questions).

Notice that all three focuses relate to the reader's emotions. If the reader is scared, then their interpretation will be different than if the reader was bored or angry. Individual and community focuses on the emotions that a reader has going into a text and how that affects their interpretation, while reactive theorists focus on catharsis. Catharsis is the purification of emotions first described by the ancient Greeks, who believed that catharsis was the purpose behind all art. The Greeks believed that if one did not purge their built up emotions by getting lost in an artistic work--be it a play, a poem, a painting, a book, a film, or a sculpture--that person would become unhealthy. Modern psychologists have confirmed these observations, noting that bottling these emotions causes one to either have a breakdown or a blow-up. As reader response theorists with a reactive focus take note of how a text changes a person, they tend to write about the cathartic experiences that a text evokes in a reader. The joy Kyle felt in reading about George and Emily's first date? Catharsis. The disgust Laverne felt at Mr. Stimson? Catharsis. The sorrow that caused both to cry at the end of the play? Catharsis. To reactive theorists, moments of catharsis are better encoded in our long-term memory and are thus more likely to affect our personality. 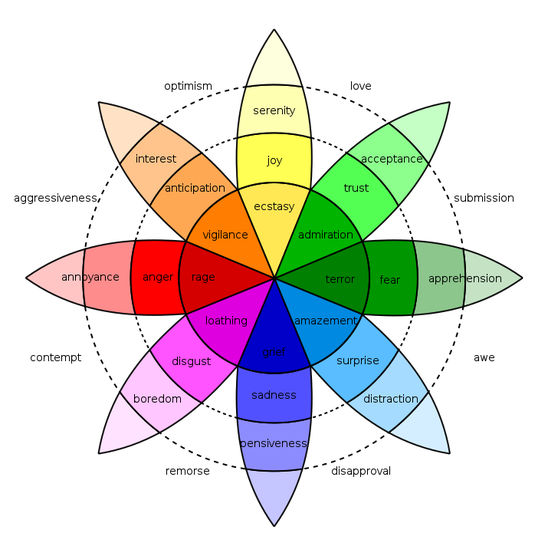 The different emotions catharsis can release, as tracked by Robert Plutchik (Wikimedia)

SO HOW DO I READ USING READER RESPONSE?

GREAT TEXTS TO READ FROM A READER RESPONSE LENS