The power of groups

Postcolonial literary theory falls into the category of SOCIETAL MIRRORS, or criticisms that reflect society (social mirrors also include Marxism, feminism, queer theory, affliction theory, and ecocriticism). Societal mirrors focus on the idea of The Other, a term for a person in society with little power or agency (the ability to change their circumstances). Those with agency are known as the privileged group, as they have access to resources that The Other does not. Some members of the privileged group actively work toward this inequality, while most members of the privileged group have social blindness--they do not willfully wish to subjugate others, but because their privilege is normal, they do not perceive or understand the struggles of The Other.

Wait... what does this even mean? Postcolonialism relies on the anthropological idea of tribalism, which is the practice of humans creating cultural groups based on common beliefs and norms, familial lines, and geographical experiences. Essentially, people divide themselves into tribes. A tribe usually contains members of one's immediate family and community. Tribes traditionally live in the same area, have access to the same resources, and have the same beliefs. Tribalism claims that humans create tribes as a matter of instinct and protection: someone might attack an individual, but won't necessarily attack a group. For reasons of procreation, tribes always include members of both sexes, and for reasons of economic stability, always include various social classes.

SO WHAT IS COLONIALISM?

Society divides itself into tribes based on similar beliefs. So what happens when the tribe meets a tribe with opposing beliefs? War. Think of nations fighting over land or sports fans arguing in a bar. Tribes always believe in their own superiority (after all, no one wants to join a losing team) and thus engage in conflict with other opposing tribes. And war only ends in three ways: 1) Both sides calling a truce and walking away, 2) Both sides completely destroying each other, or what happens most often, 3) One side overtaking and conquering the other.

Colonialism occurs when a conquering group overtakes a conquered group, changing the conquered group's norms and taboos. Think of the American colonies: in the late 1500s/early 1600s, British settlers encountered Native Americans and used their superior weapons to take land from the few natives who survived the plagues of smallpox brought by the Europeans. Some native tribes fought the settlers until they were all wiped out, some tribes fled for new lands out west, and some tried to make peace and live by rules established by the colonists.

Note that both groups, conquer and conquered, believe they are the better group. This leads the conquering group to marginalize the conquered--they take away the power and social status of the natives. Suddenly, natives don't make a bulk of their own decisions, do not see themselves in roles of power or media, and have fewer rights than the conquering class. In order to justify this inequality, the conquers create stereotypes about the natives. A stereotype is an idea that every member of a tribe acts in the same way because of their tribal association. Some stereotypes include "All Raiders fans are idiots," "All French people are cowards," and "all Asians are good at math." Even though the last example sounds positive, stereotypes always have a negative effect on the marginalized. Consider if you had Asian heritage and you were bad at math--hearing this stereotype might make you feel like you are letting down your tribe.

In response to marginalization, the conquered group (called the subaltern) show resistance, or opposition to giving power to the dominant group. Sometimes, this resistance builds up to a revolution, protests, and violence. While the subaltern reject stereotypes, they accept the premise of the stereotype: that every member of the tribe is the same (this is called strategic essentialism and is why every tribe feels that it's the best). Eventually, the subaltern must drive out the conquerors and reestablish their power or forever accept their role as a conquered class. 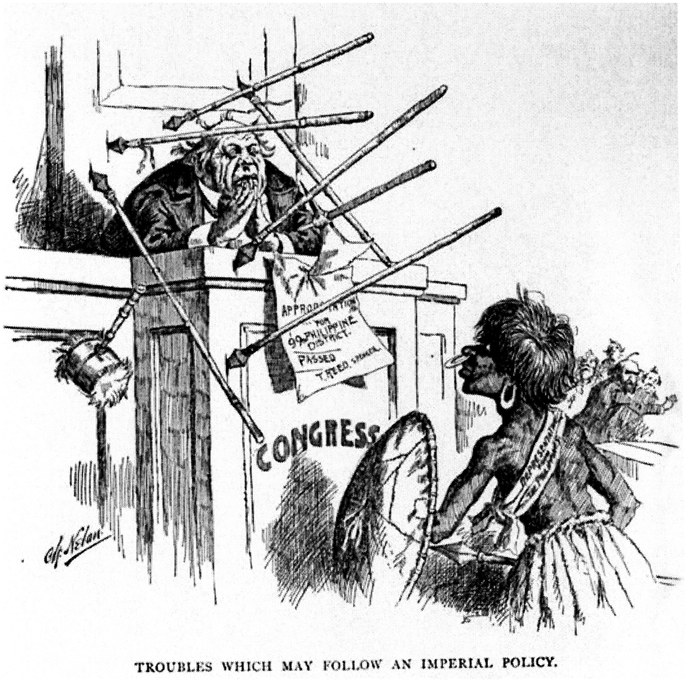 Apparently, people don't like their land and culture being taken away. Imagine that. (Punch Magazine)

The two biggest tribe identifiers after nation are race and faith. "But we live in the United States, where we have equal rights and freedom of religion. Does this mean the struggles of colonialism don't matter anymore."

Actually, they matter more than ever.

Equal rights doesn't automatically make every aspect of society equal, and it certainly doesn't convince all tribes that every other tribe is equal. In a world after colonialism, or a post-colonial world, tribes not only struggle for equality but recognition that things are unequal. Post-colonialism, therefore, is dedicated to examining how old colonial relationships manifest themselves in modern day problems. For example, in 1937, Japan invaded Nanking, the capital of the Republic of China, and massacred 300,000 soldiers and citizens, This atrocity was called The Rape of Nanking, and while Japan and China are seen as political allies and equals today, many Chinese have a distrust and hatred for the Japanese people. Another example can be seen in the idea that banks are closed on Sundays in America, a tradition based on Puritan interpretations of the Ten Commandments and seemingly out of place in an online world of 24-hour-everything. In both examples, the colonizer (Japan, Christians) is not intentionally subjugating the subaltern, yet groups that are not Japanese or Christian can feel marginalized.

If groups feel marginalized, why don't they just stop looking through the lens of race and faith and focus on how everyone is equal? Not so fast. Tribes give a person identity, and to ignore or erase the tribe is to ignore or erase part of who a person is. The struggle of postcolonial society is to allow different tribes to peacefully and equally coexist without destroying them. Often, this comes to debates about discrimination, segregation, racism, and prejudice. Though these words sound like synonyms, they are definitely not the same:

Sometimes, it's all four terms at once. (Racism Review)

It's good to keep in mind that race does not equate with just skin color but can incorporate the language one speaks, their place of birth, their manner of dress, and their religious beliefs. A literary example of this is A Tale of Two Cities, which examines tension between France and England, two "white Christian nations" which still deal with the legacy of the Norman conquest and the subsequent cycle of both nations trying to conquer the other.

While most modern societies are against prejudice and legal discrimination, racism is so embedded in the norms and taboos of modern societies that it is often unnoticed by those outside the subaltern. Yet in order for the subaltern to survive, they must view the world from the perspective of a dominant group--this is called double consciousness. Coined by Black scholar W.E.B. DuBois, double consciousness makes a marginalized person always consider which of their practices might make them a target for harassment and occasionally forces the person to sacrifice part of their cultural identity; an example would be a Muslim woman who doesn't wear a head scarf for fear of harassment. This double consciousness results in assimilation, or adopting rituals and practices from the conquering tribe. Assimilation is seen as negative as it breaks down the tribe's unique identity. Subaltern tribes also balk at appropriation, or when a dominant tribe engages in the dress, language, actions, or rituals of a subaltern group. While this may seem like flattering imitation, appropriation is seen by the subaltern as stealing what makes their tribe unique in order to feel better about marginalization.

So is racism and conflict based on colonial issues inevitable? Not at all. According to post-colonialism, awareness of marginalization can lead to laws and rules that marginalize the subaltern less. Once a conquered group is truly treated equally and the dominant group surrenders its strategic essentialism, the subaltern is given a voice in decide the norms and rules of society and becomes a cultural citizen.

Post-colonialists focus on marginalized groups, their prominence in a story, and their perspectives.

GREAT TEXTS TO READ FROM A POSTCOLONIAL LENS

XXXXXXXX
BACK TO CRITICAL LENSES