The power of nature

IT'S IN OUR NATURE

Ecocritical literary theory falls into the category of SOCIETAL MIRRORS, or criticisms that reflect society (social mirrors also include Marxism, feminism, queer theory, affliction theory, and postcolonialism). Societal mirrors focus on the idea of The Other, a term for a person in society with little power or agency (the ability to change their circumstances). Those with agency are known as the privileged group, as they have access to resources that The Other does not. Some members of the privileged group actively work toward this inequality, while most members of the privileged group have social blindness--they do not willfully wish to subjugate others, but because their privilege is normal, they do not perceive or understand the struggles of The Other.

Ecocriticism focuses on the tension between humans and the natural world. Easy enough, right? Yet which force is more powerful? When reading The Lorax, the answer is obviously man--industry easily kills every tree and drives away all wildlife. But what about Jack London's "To Build a Fire?" A man, alone in a frozen wasteland, struggling to survive--it seems that in this story, nature has the power and the man is powerless. Yet when we consider The Other, we must consider who has agency and what is considered normal, and for mankind, humans are normal and nature is other--even if nature sometimes has the upper hand.

Wait--how can mankind be different from nature? We are natural creatures with biological components, wants, and needs. This is an aspect of ecocriticism: how wild are humans? There are times when we give into our baser instincts (what Freud called the id--see psychoanalysis), and humans devolving into animals is a topic in some ecocritical analyses. However, most of the time, nature is defined as that which is not human: plants, animals, and humanoid creatures. This includes manmade environments in the absence of humans: a city alley without people in it flourishes with insects, stray cats, and weeds even though they are boxed up in a manmade world. 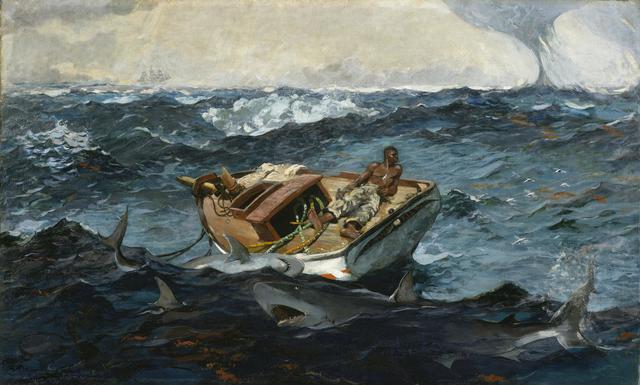 Nature being nature ('The Gulf Stream' by Winslow Homer)

OF MICE AND MEN: Examining Anthropomorphism

Notice "humanoid creatures" in the definition of nature. Humanoids are creatures that are seen as both human and not human at the same time. These could include alien beings or terrestrial creatures that are unrecognizable as human, like the Morelocks in H.G. Wells' The Time Machine or the Xenomorphs in Alien, but can also includes human creations, such as robots and golems. Even vampires and zombies, which were formally human, have lost their humanity and are humanoid. However, this does not include humans that are misshapen, impaired, or superpowered like Quasimodo or Superman: this is covered by affliction theory. Animals with human qualities and characterization, like Bugs Bunny or Winnie the Pooh, are also not humanoids--this is called anthropomorphism, or turning animals more human.

Yet this creates a question: where is the line between human and nature?​ Ecocriticism meditates on this idea, known as anthropocentrism. Anthropocentrism is the idea that humans view nature from their own perspective--that we always compare nature to ourselves. We personify animals in human terms and vice versa: "My sister is as hyper as a Labrador puppy," "That cat looks just like my English teacher," "Tomatoes are awful because I think they taste nasty." Ecocriticists are always looking at nonhuman characters and asking one question: how close to humans are they? Do they think? Have opinions? Have souls? Philosophers have debated how close animals come to humans: for example, Peter Singer, a chief ecocentricist, put forth the idea that what unites humanity and animal kind is our capacity for suffering, and thus animals deserve some rights.
The question of ethical rights is especially true of animals who act human or narrate a story, such as Napoleon in Animal Farm or Enzo from The Art of Racing in the Rain. This is also a concern for characters that straddle the line between human and creature, like centaurs, vampires, demons, and zombies. The best example of this is Adam Frankenstein, Victor Frankenstein's creature from Frankenstein: his meditations on if he is human and has a human soul are a crash course in anthropocentric thought. This idea also goes the other way: Rick Deckard in Do Androids Dream of Electric Sheep? is human, yet his encounters with the Nexus-6 androids that can act more humane than he can make him wonder how "human" he truly is. Often, the division between man and beast comes down to the idea of choice, or conscious decision to act. Animals are seen to operate on instinct alone, giving into natural hungers, while humans are defined by choosing to act, sometimes even against their desires.

CONSERVATIVE VIEWS: The Basics of Ecology

Linked to concerns over how close to human animals are is a concern for conservation, or a preservation of the natural world as unfettered or undamaged from human involvement. Ecocritical scholars always consider how humans "tame" nature by destroying it--destroying forests for cities, polluting the air for greed, or at worst, bring upon a natural apocalypse as seen in The Maze Runner, The Stand, and Logan's Run.  Apocalyptic novels are especially interesting, as first man destroys nature, and in its twisted ruin, the environment turns against man. The post-apocalyptic world of garbage in WALL-E, for example, was caused by man and then poisons mankind to the extent that they must leave the planet to survive. This doesn't have to be on a global scale either: Richard Wright surviving the "concrete jungle" of Chicago in Black Boy is just as perilous as the boys surviving the actual jungle in The Lord of the Flies. How the environment is threatened by man and in turn threatens man is called ecology--literally Greek for "the study of home."

Some environments are less... well, environmental than others. (Kevin James, WikiVoyage)

SO HOW DO I READ LIKE AN ECOCRITICAL SCHOLAR?

Ecocriticists focus on how man affects nature, how nature affects man, and how characters (both human and nonhuman) are defined by their perceived humanity.

GREAT TEXTS TO READ FROM AN ECOCRITICAL LENS