Copyright is literally the right to copy-- copyright protection means that if you create something, you are the only one who can copy, perform, or sell your creation. You are also the only one who can make a derivative work based on your creation (like when a book is made into a movie). Copyright protection is an essential right in our country-- Article I, Section 8 of our Constitution empowers Congress,

"To promote the Progress of Science and useful Arts, by securing for limited Times to Authors and Inventors the exclusive Right to their respective Writings and Discoveries."

Copyright covers books, poems, songs, plays, published articles, software, video games, photos, movies, and other creative works. A special type of copyright called a patent covers technology and inventions, and another type of copyright called a trademark protects business names and logos; these are different from copyrights because patents and trademarks must be applied for, while copyright protection is automatic. Notice that copyright covers actual things--ideas, data, and facts cannot be copyrighted. Government documents are also not protected by copyright.
​
Pretend you have created a painting. You own the copyright of that painting, meaning that you alone have the right to that painting in any form. No one else can sell prints of the painting or even photograph the painting without your permission as long as you own the copyright. If you want to make money from your painting, you can let a museum pay you to hang it in their gallery for a limited amount of time, or you could sell a company royalties (permission to copy something) to produce products with your painting on it. But be careful--if you sell the original painting itself to the museum or company, you are selling your copyright protection as well. 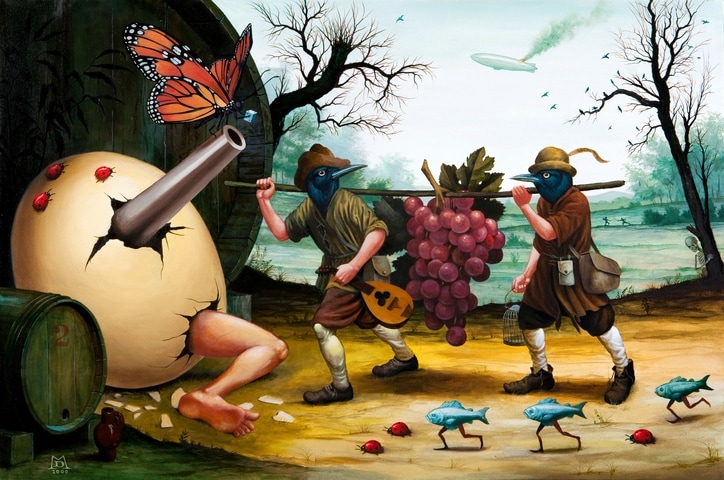 Keep in mind some paintings may sell better than others. ("The Other Side of the Bridge" by Mike Davis)

How long does copyright protection last?

Originally, copyright protection lasted for 28 years. However, over the past couple of centuries, authors have persuaded Congress to extend copyright protection of new works for the life of the author plus 70 years. Sometimes there are corporate authors -- a Disney animated film, for example, has hundreds of people working on it -- and corporations can hold a copyright for either 95 years or 120 years.
​
Once copyright protection expires, it enters the public domain. A public domain work is a creation that anyone can copy, publish, perform, or reproduce for free. All of Shakespeare's plays, Mark Twain's novels, Beethoven's symphonies, and Vincent Van Gogh's paintings, as well as other works, are free for everyone to copy, remake, or even rewrite because their original copyright has long expired. Some  films, such as His Girl Friday, It's a Wonderful Life, and Night of the Living Dead, are also in the public domain because their studios did not apply for copyright protection.

Some creators even voluntarily give up their copyrights. Some online content producers publish as part of the creative commons, meaning you can download and use their software or coding for free as long as you give them credit (more on this later). Tesla Motors recently made the blueprints to their electric cars public, saying that other car companies could use their designs for free as long as they didn't try to patent derivative technology. How​ever, these are the exception: most works of the 20th century, from Superman to Anchorman, are still under copyright protection and can only be copied, published, performed, or reproduced with permission.

Oh no! Does this mean my Twilight fanfic on WattPad is breaking the law?

​Twilight fanfic? Really? That's what you do with your spare time? Ugh.

Anyway, don't worry about breaking the law. While Stephanie Meyer owns the rights to Twilight and any published works using her characters and concepts, fanfic is ignored by copyright law unless the fanfic author sells copies of the fanfic or the copyright holder files a complaint. When author E.L. James wanted to sell copies of her Twilight fanfic, she had to change the names of characters and places to avoid violating Stephanie Meyer's copyright protection (this fanfic became 50 Shades of Grey). Even though your fanfic is public and published, neither you or WattPad makes money off the work. Most authors actually the popularity fanfics bring their original works. However, if Stephanie Meyer reads your fanfic and wants it taken down, you would have to comply, but you wouldn't be fined or put in jail as long as you aren't selling copies of your stories or pretending you created Twilight.

I bought a Michael Jackson song on iTunes. That means I bought the copyright and can use his song in the background of my YouTube video... right?

Not exactly. You bought a copy of his song, which means you can listen to the song whenever you want, lend the song file to a friend, and even make a copy of the song file to store on both your phone and laptop. However, these are all private uses. The copyright for public use of Michael Jackson's music still belongs to Sony Records and Michael Jackson's family until around 2079. This means you would need permission to play the song to a crowd, perform your own version of the song, or use the song in a video you create.

But what about the thousands of covers of songs on YouTube? Some copyright holders are more flexible than others. Most popular artists allow fans to cover their songs on YouTube because it helps spread the popularity of the original song, which makes them more money (and if an artist wants to sell the recording to fans, they pay the original artist a royalty). This isn't just limited to music: Hasbro animation also allows fans to post entire episodes of their Pound Puppies, My Little Pony, and Littlest Pet Shop television shows because it results in more kids seeing them, which means more toy sales. However, Hasbro does not allow fans to make their own toys or video games based on their characters.

Wait... If copying without permission is illegal, my teacher should totally be arrested! The other day, he gave us an article photocopied from National Geographic. Isn't that breaking the law?

Actually, your teacher is not breaking the law because of Fair Use. Fair Use is the exception of copyright, which allows people to use copyrighted material for free for the purposes of...
However, fair use is not a guarantee, even for education. Fair Use is not one-size-fits-all, and is determined on a case-by-case basis. The following four factors need to be determined when claiming fair use:
Let's go back to your teacher. He photocopied an article from National Geographic to give to the class for an assignment. Was this educational Fair Use?
It looks like your teacher photocopied the article legally under Fair Use.

So what do I need to remember about using copyrighted material?

For school projects and academics:

Direct plagiarism is where one copies the work of someone else and claims it as their own. In my time teaching, I've caught all kinds of direct plagiarism, including:Most student commit direct plagiarism out of fear -- typically, they procrastinated on an assignment or don't understand it, so they plagiarize so the assignment gets done. This is the least tolerated kind of plagiarism, as one has to actively commit the act of copying and pasting even when knowing it's wrong. Direct plagiarism typically results in students being expelled, teachers being fired, artists losing royalties and getting sued, and award-winners (from scholarships to Nobel winners) being stripped of their awards.

Indirect plagiarism is often referred to as "accidental plagiarism," as the context around the plagiarized material implies that the student isn't pretending the work is theirs, yet they do not give proper credit to the original author. For example, I've had students add a photo pages of their portfolio they found from the internet without telling where that photo came from. Other students have quoted a person to make a point without referring to where that quote originates from.  Most cases of indirect plagiarism revolve around a student citing a fact or an outside idea without including accurate quotation markings or an in-text citation that shows where the information originated. Just because this is often accidental doesn't mean it's excusable; while teachers may be more forgiving of these mistakes as you are learning to write, direct and indirect plagiarism carry the same consequences at most educational institution.

Self-plagiarism is the most nebulous of the three. How can one even plagiarize themselves? Self-plagiarism occurs when a creator submits a previously created work as a new creation or submits a single creation for two different classes. Why is this bad? In academia, creative projects like stories and essays develop skills to improve or change the student. Say a student writes a Lord of the Flies essay freshman year and then uses the same essay again senior year. This violates the spirit of academia wherein student work should show off their current development.